Given the state of modern technical applications and the advance of the game industry, it is only a matter of time until interactive application will completely control all levels of entertainment and mass media. Also social interactions in general are subject to change. Usually these changes are only considered within in the digital context of the internet. Nevertheless the basic human need for direct communication and interaction remains.

The project “TOYs” creates a hybrid space merging concepts of sci-fi-films, where people can be controlled by he audience, with the direct notion of play. The participants can access this scenario from there home PC, using the online service “Skype”. This application is used to install a live-AV connection from the viewer to the performers, who is acting in the actual gallery space, using a wireless webcam and microphone. After the first call it is up to the viewer to determine what happens in the performance space, which will feature several stages of a toyshop. The performance lasts 30 min and can be repeated several times an evening.

When carried out for the first time in April 2010 our project was not designed in order to transmit a certain moral or meaning but rather worked as an open scientific experiment or a social investigation on how people use technical devices, in order to hide their true identity, reveal personal details to a stranger, forced the performances into uncomfortable situation or were just enjoying the unusual setup of interactivity in a theater space.

In this way we combined classic theater, with live performance, the tradition of video art and the interactive possibilities of contemporary gaming. 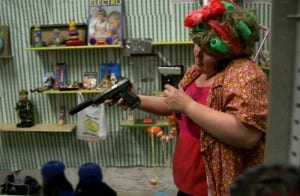 Paul Wiersbinski studied video art with Mark Leckey and Douglas Gordon at the Städelschule in Frankfurt (Main). He has assisted artists such as Tim Staffe, Asta Gröting and the VJ-team monitor.automatique.
His own work has been screened in intl. exhibitions (e.g. ZKM Karlsruhe / Mediations Biennale Poznan / Alma Enterprises London / Goethe Institute Belgrade), theaters (Mousonturm Frankfurt / European Center of the Arts, Hellerau / Volksbühne am Rosa-Luxemburg-Platz, Berlin), festivals (Filmwinter Stuttgart / European Media Art Festival, Osnabrück / EJECT Mexico City) and received several awards, such as the videoartprize of the filmboard Bremen and a project grand of the Federal Cultural Foundation of Germany.
He has recently held lectures and presentations, a.o. in the British Computer Society in London and at the Conference ISEA, Sabanci University Istanbul.